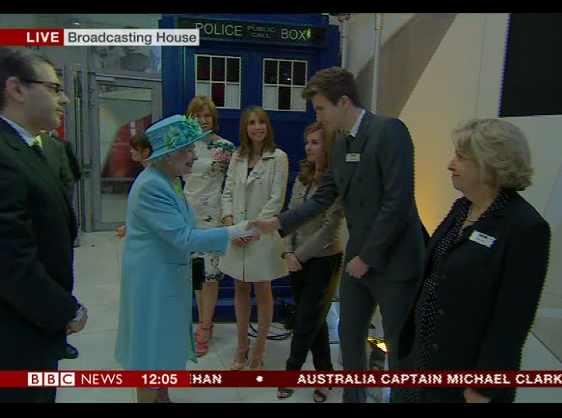 Radio 1 has seen an array of famous faces pass through its doors over the years but none as famous as Her Royal Majesty. Yes, the actual Queen paid a visit to officially open the brand new BBC Broadcasting House on Friday.

The Queen was given a tour of the new Radio 1 and 1Xtra offices at the very top of the building, where she met various DJ’s and presenters including Greg James. According to Grimmy, The Queen ‘snubbed’ him on her tour of the building. Or maybe she was scarred by his version of the Blurred Lines video?

The Queen just came in to work. I asked her “y’alright?” She smiled and moved on #bestfriends!

Her Royal Majesty was also treated to a special performance from The Script and BBC Introducing artist, Indiana in the Live Lounge.

Charlotte is a student from Leeds with an interest in the media, music, and all things BBC Radio 1. She joined the Unofficial Mills team of contributors in May 2013.
Newer Post
Sara Cox gets married!
Older Post
Heathrow problems cause chaos for Radio 1’s Big Weekend