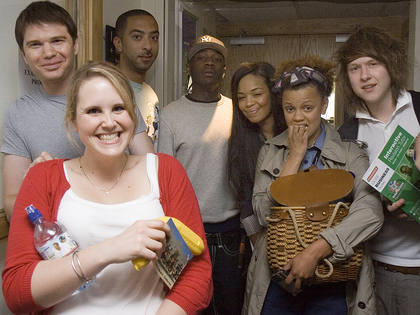 Beccy Huxtable, former Assistant Producer for The Scott Mills Show, has won an award for her work in highlighting the illness Multiple Sclerosis.

She won the MS Inspiration award at the MS Society Awards 2013 after being diagnosed with the illness in 2012 and highlighting her condition in both radio appearances and on social networking. She was also interviewed in a series of high-profile magazine and newspapers including Glamour, the Express, and Daily Mail.

Speaking in a video interview for the MS Society after the awards she said: “I will do absolutely everything I can to raise awareness, not just for myself, but for the other people that have been affected like my colleague Scott’s mum. It is a cause close to my heart.”

“From day one it was important for me to be honest and open about my diagnosis. If it just helped one person it was going to be enough for me. We had some lovely emails into the show, one was from a 16 year old girl living in the North of Scotland saying no one has ever spoken about MS before and that ‘I’m so grateful’ and to me that meant so much. Even if she’s the only girl I’ve helped that’s job done.”

Beccy still works for Radio 1 and the BBC but took a behind-the-scenes role earlier this year to ensure her condition did not worsen.

Jono is a social media manager working in the news industry. He created Unofficial Mills back in 2004 when he was just 15! Two decades later he still contributes to the website.
Newer Post
Scott Mills on Serbia’s X Factor
Older Post
Scott: I’m pleased I didn’t get breakfast