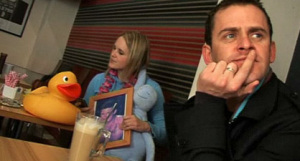 Scott: I questioned whether I wanted to continue as a DJ

Scott Mills has been talking about suffering from mental health disorders ahead of tonight’s Virgin Media Mind Awards.

Scott, who has spoken about depression and anxiety in his biography ‘Love You Bye’, told the Daily Mirror that he suffered at school because of the illnesses and almost gave up his career.

He said: “When I had my anxiety I didn’t know anyone else who had had a similar experience so I thought I was going mad. I kept wondering, ‘Do I need a psychiatric home?’

“At my worst, I felt so ill I called an ambulance once. A panic attack came on without warning and I genuinely thought I was going to die, because my mind was playing tricks on me. I was tingling all over because of the lack of oxygen. When they arrived I felt like a complete idiot because I wasn’t that kind of ill, but they were very kind.”

He is encouraging all sufferers to make use of Mind’s charity helpline, and draws on his own experience of mental illness when giving guidance: “Do try to see someone and keep to the appointments. You can’t just put a plaster over how you’re feeling and it’ll be fixed. It’s a process that can take months and years. I was given anti-depressants and had counselling.

“There was no obvious trigger but now, what used to be bad nerves when I felt as though I couldn’t breathe are now positive nerves.”

Scott even admitted at one point his future as a radio DJ was thrown into doubt when he felt ill.

“Working at Radio 1 and being thrown in at the deep end with interviews has been so good for me.

“I was worried my career would suffer at one point. I questioned whether I wanted to continue in my profession and go on to a higher level because of how I felt. But something inside me told me I wanted to do well. I never felt like I had determination back then but I obviously did.

“I used to spend weeks at home and even simple things like leaving the house felt like a chore. Now I can be calm even under a lot of pressure.”

Jono is a social media manager working in the news industry. He created Unofficial Mills back in 2004 when he was just 15! Nearly fifteen years later he still contributes to the website.
Newer Post
Scott meets Wills
Older Post
Matt Edmondson sits in on Friday