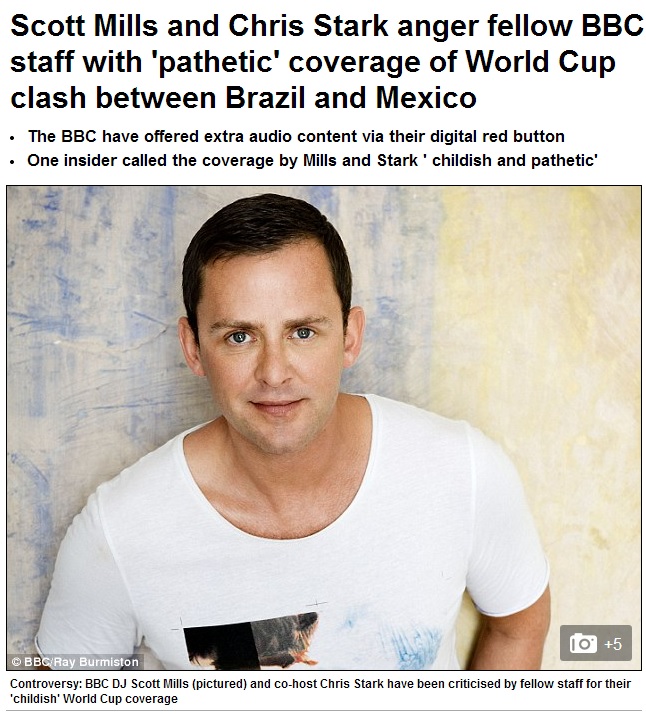 I’m surprised it has taken the Daily Mail so long to pick up on Scott and Chris’ red button coverage, but sure enough today there is an article in the newspaper blasting the coverage and the publicity it is given by the BBC.

The article claims that an insider at the BBC has called the Radio 1 contribution to the tournament ‘puerile’ and that the commentary has upset those who wish to cover the event professionally. It also says that the source has taken issue with the feed being ranked higher on the red button than the 5Live coverage.

The ‘insider’ is alleged to have said that the Brazil v Mexico match was “the most puerile, childish, pathetic stuff that you could wish to hear” which I think probably misses the point of the feed.

They added: “There are 11 million watching the game and we’re directing viewers to listen to utter garbage.”

A spokesperson, however, suggested the pair could be used to commentate on the match again by stating: “We are offering the best service we can on all platforms and the Radio 1 audio is for a Radio 1 audience. The guys loved doing it and we may use them again.”

Unofficial Mills was unable to verify the name of the source complaining, but points the finger at Chappers or Phil Neville.

Yesterday over 250 people signed a petition calling on the BBC to offer #onemoregame on the red button.

Jono is a social media manager working in the news industry. He created Unofficial Mills back in 2004 when he was just 15! Two decades later he still contributes to the website.
Newer Post
Scott Mills joins Strictly Come Dancing
Older Post
One More Game – The Petition