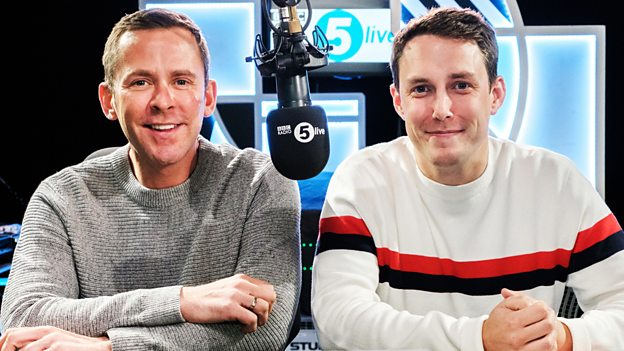 Scott Mills and Chris Stark have detailed some of the features on their new Saturday morning show on BBC Radio 5 Live.

Ahead of Saturday’s first programme, the duo are promising all of the usual fun without any of the music to interrupt the show.

The hosts say they will also “preview the weekend’s sport action in a way you don’t have to be a sports fan to love”.

One of the features, Real Life VAR, will involve Scott and Chris trying to referee real life disputes involving friends, partners and relatives.

The pair will also turn the traditional radio quiz on its head by putting the listeners in the hot seat… and also providing the prizes.

The 5 Live show will also bring back “thank you” letters with a modern twist – by getting listeners to send over to the presenters.

And Scott and Chris will also be attempting Fantasy Football with Mills hoping to beat Stark at his own game despite a lack of sporting knowledge.

Finally each week the show will introduce a friend of the show to read out messages that listeners send in. On Saturday they’ll be joined by Vicky Pattison for the duration.

The first show airs on Saturday between 9am and 11am on 5 Live and the BBC Sounds app.

Jono is a social media manager working in the news industry. He created Unofficial Mills back in 2004 when he was just 15! Nearly fifteen years later he still contributes to the website.
Newer Post
BBC radio hosts coronavirus ‘singalong’
Older Post
Scott Mills and Chris Stark to host new 5 Live show